What is Inside Sports Medicine?

The episode opens with a combination Souryal story / business of medicine discussion about insurance, deductibles, and being an informed medical consumer.

Doctor Garrison talks about programs that help screen kids for their susceptibility to ACL injuries and train them to prevent injury. The Doctors also talk about why teenagers are so susceptible to ACL injuries, whether there is are genetic risk factors for these injuries, and how these programs can help improve overall performance.

They also answer questions on shoulder injuries, weight training regiments,  knee replacements, and what people with bone spurs can do to increase their range of motion.

In honor of Inside Sports Medicine’s 500th show, Doctor T.O. Souryal gives us his Top Five Innovations in Sports Medicine and Top Five Sports Movies. Doctor Melvin Manning joins the show to talk about being an informed patient and the terminology of sports medicine. The doctors also answer questions on everything from ACL tears, to herniated disks, to clicking knees, to the differences between hernias and sports hernias.

The NFL conditioning test is a joke, but GPS tracking works

This year it was Marcell Dareus. Last year it was Jacoby Jones. The year before, it was Felix Jones.

Every year, an NFL player fails his pre-season conditioning test, and the sports media—desperate during this yearly lull in the news cycle—gives the player a good ribbing about not taking his job seriously and eating too many Double Stuft Oreos.

Despite all of the hype surrounding the conditioning test, some coaches are starting to recognize that it might not be all that relevant.

As Dallas Cowboys coach Jason Garrett noted, players go through the conditioning test on day one, “and the next day you’re on a practice field getting yourself involved in football movements, very different than what that conditioning test was.” 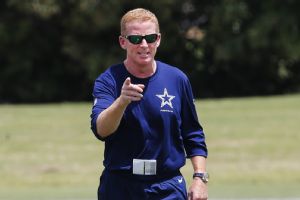 The test can be especially costly for some teams, as the Baltimore Ravens discovered today when defensive back Aaron Ross tore his ACL during the test.

Some coaches are now turning towards sports science to figure out how best to prepare their players for the rigors of a 17-week regular season.

The solution may lie in using GPS tracking technology to quantify players’ movements during practice, and utilizing that data to avoid preventable injuries.

Florida State University football coach Jimbo Fisher began using GPS tracking two years ago, and has since reduced the occurrence of soft tissue injuries on his team by 88 percent. 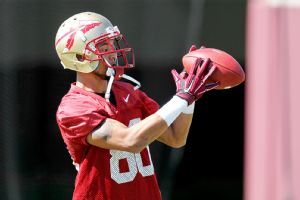 Now the technology has made its way to the practice fields of two prominent, injury-addled NFL franchises—the Cowboys and the Green Bay Packers.

According to the Australian sports scientists who first popularized GPS tracking for practices, the data suggests that teams should gradually increase high-intensity workouts by 10 percent each week until the season begins.

This gradual increase is tough to achieve with the NFL’s short, fragmented off-season, but one can still expect to the Packers and Cowboys take it easier on the players during the first few days of camp.

If it works for these two franchises, you can bet that every team will be using GPS tracking by next year’s training camp.

Collapse player
Back to top